Biodiversity is not evenly distributed on Earth. The latitudinal diversity gradient represents the fact that tropics harbor many more species than temperate regions. Despite intense efforts on deciphering the processes (speciation, extinction and dispersal) shaping such patterns over time and space, the question of what determines biodiversity patterns remains a key research theme in evolutionary biology. We adopt an integrative approach mixing phylogenetics, paleontology, ecology, species traits, and paleoclimate to understand the onset of deep-time species richness patterns.

Estimating the temporal dynamics of diversification rates from phylogenies

Species richness varies tremendously among biological groups with species-rich groups that are sister to species-poor groups (e.g. angiosperms versus gymnosperms). Explaining why such taxonomic differences exist remains an active area of research. A likely hypothesis states that such unbalanced diversity is related to differences in diversification rates with some groups diversifying much faster than others. We evaluate diversification rates using a panel of methods and we compare these rates among groups. When possible, we do the same using the fossil record and compare the fossil-based inferences with the phylogeny-based estimates. 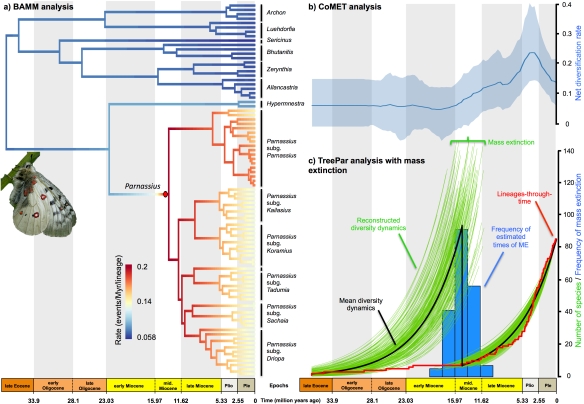 Understanding the impact of past environmental changes on diversification

To quantify the effect past environments that had on diversification rates, we develop an approach that allows linking of speciation and extinction rates to the paleoenvironment. This approach builds on time-dependent diversification models and allows speciation and extinction rates to depend not only on time but also on an external variable, itself depending on time. Any environmental variable that varies through time can be incorporated in the model. Doing so, we applied models linking diversification to temperature, sea level, mountain elevation, or Asian monsoons. A simple free-access pipeline in R is available to fit these models on multiple phylogenies.

Studying species-poor clades to unravel extinction with phylogenies and fossils

Many phylogenetic studies focused on deciphering the factors responsible for elevated or low speciation rate. However, most of these studies ignored the rate of species extinction, probably because some authors have advocated that extinction should not (or can not) be estimated using only phylogenies. Yet, extinction is a dominant feature of biological evolution as 99.9% of all species that ever lived are now extinct. Episodes of extinction have punctuated the evolutionary history of life, and extinction is a central component of the net diversification rate estimated with phylogenetic birth-death models. We study species-poor clades by focusing on the extinction process and its temporal dynamic, with the aim of unveiling that extinction can actually be estimated when heterogeneity of diversification rate is taken into account.

The waxing and waning diversity pattern of Lamniformes. From Condamine et al. (2019 – PNAS)

With the increasing availability of dated trees, it is possible to study where extant biodiversity comes from: where did it originate and what were the dispersal pattern or vicariance events that shaped the current geographic distribution patterns. We pay great attention to apply the existing models, like the Dispersal-Extinction-Cladogenesis (DEC) model, for estimating historical biogeography. We also work on an extended version of the DEC model that incorporates paleogeographic changes, takes into account classical vicariance, can fit phylogenies with fossil branches, and allows inferring ancestral areas for large (5000+ species) phylogenies. 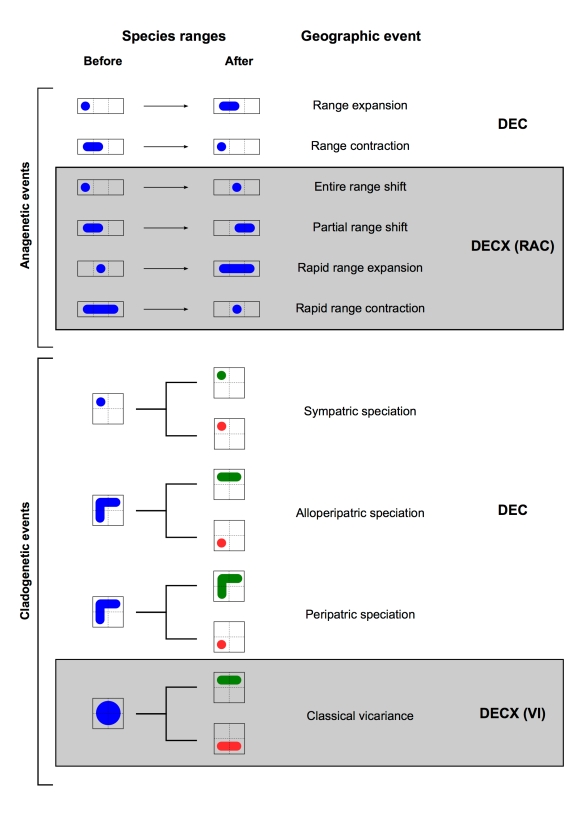 Estimating divergence times is a mandatory and delicate step in many phylogenetic studies because dated trees represent the heart of many downstream analyses like estimating diversification rates. We conduct sensitivity analyses to assess the effect of priors in Bayesian divergence times. The use of different prior distributions for node calibration, the effect of branching process prior or the number of clocks in partitioned analyses are some examples of studies we have performed.

The impact of the branching process tree prior in cycad phylogeny. From Condamine et al. (2015 – BMC Evolutionary Biology).

Macroevolution seeks to understand deep-time processes shaping past and modern biodiversity. Fossils and molecular phylogenies provide complementary approaches to estimate diversification processes explaining biodiversity patterns across space, time, and clades. For a long time, paleontologists and biologists have worked independently, with few studies trying to integrate both disciplines. We aim to advance evolutionary research where paleobiology and molecular phylogenetics meet and complement each other. We focus on the study of taxonomic, phenotypic and functional diversity, morphology, and function have changed through time.

Insects are by far the most diverse non-microbial groups on Earth with single beetle families being richer than all the vertebrates. Unfortunately, we still know little regarding the higher-level phylogeny of many insect families. Starting with fieldwork, identifications, passing through lab work and iterative taxonomy and culminating in thorough phylogenetic analyses, my colleagues and I are working on several families to improve our knowledge on their phylogenetic relationships, which can then be used to address questions in ecology and evolutionary biology.

At the top is a picture of the maquis in Chute de la Madeleine, in the Grande Terre of New Caledonia (© Fabien Condamine).